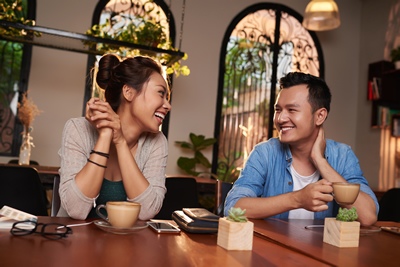 Of course, the language used to describe certain things changes too.

You might know what 'catfishing' and 'friends with benefits' is, but there's always some new terms popping up.

To help you stay up to date with these terms surrounding the modern dating life, I've compiled a list of the top 15 words and phrases you absolutely need to know.

Benching is a sports term that also applies to the dating world.

When an athlete is underperforming or gets injured during the match or for whatever reason is removed from a game, they are sent to the bench.

Outside the field, you could be dating someone and you're not really sure it's working out great.

However, you may be wrong on that assumption. There might be something there, but you just aren't feeling it right now. So what do you do?

Have them sit on the bench!

Temporarily remove that person from your mind, focus on other aspects of your life and return to the situation with a clearer mind and a fresh perspective.

Put them on the bench and give yourself some time to think before doing anything drastic.

People love feeling loved. Sadly, you can't always be loved by everyone you meet.

Even though you try your hardest, you make all the right moves, etc., the other person just isn't giving back.

That's where any reasonable person cuts their losses and tries their luck elsewhere.

But what if the person who isn't reciprocating the love and affection wants to continue feeling wanted? What if they want to perpetuate this ego boost by giving you just enough attention, so that they may carry on receiving it in undeservingly higher amounts?

They will leave breadcrumbs that they hope you follow.

That way, they give you just a tiny bit of attention and they keep you around whenever they need that psychological "pick-me-up", without actually committing to anything themselves.

Yet another sports term that has infiltrated the dating vocab.

'Three and Out' refers to the three months where two people start dating.

At the end of this period of time, you are considering if this relationship can ever go anywhere.

It's a while after those first three months that the... let's call it "honeymoon period" has ended and you've gotten to know that person intimately.

You can make an educated choice as to whether you should break up or continue dating.

Kittenfishing is somewhat close to catfishing.

Well, kittenfishing is nowhere near as severe.

Someone who's catfishing will tell you beforehand that they are 6 feet tall, but in reality, they stand at an otherwise respectable 5 feet 9 inches.

Someone who engages in kittenfishing will instead advertise themselves as 6 feet while actually being 5 feet 10.

After all, a small white lie has never seriously misled anybody, right?

One and Done refers to a college basketball player's year of playing before heading on to become a pro.

This term is also used to describe a short-term relationship.

Some people nowadays are so accustomed to online dating that other people start quickly becoming disposable - there is always a new potential mate a few feet away.

According to Urban Dictionary, when you have sex with someone and then you end the relationship, that's a "One and Done".

In addition, this term may also refer to a person's mistake or quality that is so bad, the only thing you can do it to conclude the relationship then and there.

Take smoking for example. If you enjoy smoking but she hates it with a passion... that's game over for you.

You can think of Cloaking as an extreme version of ghosting.

Let's say that, for example, all your online dating presence finally pays off and another person, after much back and forth, has agreed to a date.

But when that person fails to show up at the place you both agreed on, you hop online trying to contact that person.

But what you end up discovering is that you have been blocked from every imaginable venue of contact with them.

Every social media they use, Snapchat, IG, FB, Tinder, every single one has you blocked.

Now, communication is entirely impossible. That person has succeeded in cloaking their entire presence from you.

Vampiring is all about setting up a date with someone who can metaphorically open doors for you.

Let's say that you want to land a job in a highly competitive market and you want that contact who can make it happen.

Also referred to as a milk date, this (highly unethical) action will enable you to extract vital information, suggestions, and even connections with people in that profession.

Maybe you are too young to know him, but do you remember Casper, the friendly ghost?

He has been around ever since the 1940s, but his most recent, well-known resurgence was in a 1995 movie that also starred Christina Ricci.

Casper, even though he's a ghost, would never just decide one day to walk out of peoples' lives out of the blue.

Caspering is the nicer, smoother alternative to ghosting.

In order to avoid hurting her, you start reducing the rate at which you answer her calls or texts, and you stop being available for dates so often.

If she doesn't take the hint, you can always come out and tell her it's not working out before you disappear forever.

During the summer, you are an unstoppable partying, dancing, loving-making machine.

But then autumn slowly approaches and the temperature starts getting lower and lower.

All that partying appetite is going away, but that doesn't mean you have to spend these upcoming cold days alone.

Cuffing is the action that describes the search for a relationship that can last throughout the fall/winter seasons.

You might potentially be seeking someone a bit less adventurous, more willing to sit in one Sunday evening and watch movies with you.

Someone who loves the idea of cuddling under hot blankets and trying not to sneeze on you when that inevitable flu comes knocking.

You've just been ghosted or Caspered.

Naturally, you want that person out of your life because your feelings are hurt.

Yet this person, for whatever reason, never truly goes away. This is so much easier for them to do in the modern, digital age.

These people will orbit around you and make their presence known by liking or commenting on your posts on various social media.

They will not make direct contact but always stay uncomfortably close to you, refusing to disappear from your life.

Are you flirting or hitting on a girl in a way that's a little bit on the cute and sugary side?

It's not at all sexual or crude.

Some people do consider it a bit... too much, but hey, if it comes from a place of genuine attraction, then it can only be received positively.

On the one hand, you have cuffing where you look for a potential mate for those cold winter days.

On the other hand, you have freckling season which is all about trying to find a person you can enjoy all the amazing summer days with.

You could just enjoy some casual dating or the occasional hookup, but it might be more worthwhile for you to find someone hot and wonderful that you can take out to all those awesome beach parties, concerts, festivals, you name it.

On top of that, those freckles may disappear but that doesn't mean the same needs to happen to the relationship.

When the fourth batter in rotation can score runs by driving the other three players who made it on base to home plate, that's a Batting Cleanup.

In the world of dating, you are essentially that fourth batter who's there to capitalize on the hard work of the people who came before you.

When they are a bit drunk and have been flirted with by other people but still haven't gone home with anyone, that's when you swoop in to score.

You want to do this right before a party starts dying out or before a bar's closing time.

In the world of adult movies, a fluffer is tasked with keeping a man... let's say 'erect' while the crew is preparing the next scene or shot.

In terms of dating, however, we refer to a man's wingman as a fluffer.

Your personal fluffer's objective is to strike up conversations with girls.

He will go do his own thing and once the crowd is all warmed up, he will leave the stage to you.

The fluffer is not interested in finding someone for himself (he might even be married or gay) - he's only using his wit and charisma to break the ice and allow you to take over the interaction.

Let's say you're in a relationship and you worry it's not going to turn out great.

Being dumped out of the blue is going to hurt - you know this and you want to minimize the impact.

This is why you start building connections with other people and keep them around.

If that break-up ever ends up becoming a reality, you can rely on these other people to cushion that nasty fall.

Some people find having these cushions around them at all times really handy so that they can fall on them in a case of emergency.

Well, there you go!

You are ready to tackle the ever-changing world of online dating now that you know these 14 crazy dating terms.

Oh yeah, that's right, one of them is totally made up!

Bet you didn't even notice, huh? 😂